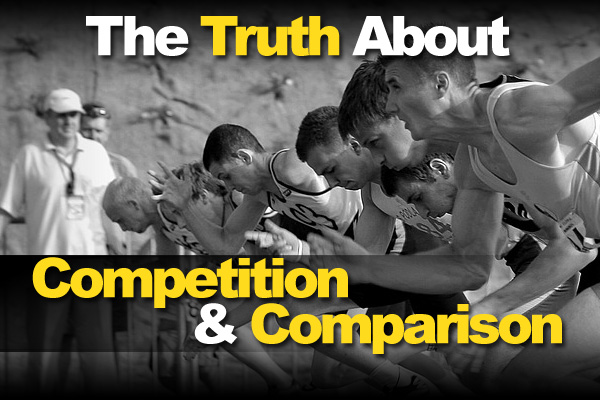 So what’s the truth about competition and comparison?

The truth is two-fold.

On one side of it, competition is REALLY good. Our society is driven by competition.

Our schools have sports teams that compete.

Businesses compete against each other.

It’s a natural element of who we are and it’s also necessary for us to continue to grow as a society.

On the other side…

Competition is basically another way of saying…

You are comparing yourself to someone else.

You don’t compete with someone unless you are comparing yourself to them in some way.

Sports teams are comparing their athletes to other athletes.

Businesses are comparing themselves to others that are in their market.

And siblings are comparing themselves to each other to see who is better.

So it’s really interesting to look at competition.

And as President Theodore Roosevelt said…

“Comparison is the thief of joy.”

Which is crazy because when we are competing against or towards something we tend feel very productive.

Yet, that also means you are measuring or comparing to something else as well…

Which can take away your joy or happiness.

Not too many of us stop to really look at this and think about it.

So what can you do about this?

Well, I go into that in this episode of The Other Side Of Being An Entrepreneur.

I’m hoping it will give you a different viewpoint to look at all of this from.

As entrepreneurs, we have been trained to view competition one way.

The reality is it can be seen many different ways.

But you have to manage it from a balanced and healthy perspective.

Because if you don’t, comparison will eat you alive.

So take a listen to the truth about competition and comparison and let me know what you think.