Successful Entrepreneurs Are Followers And So Are You 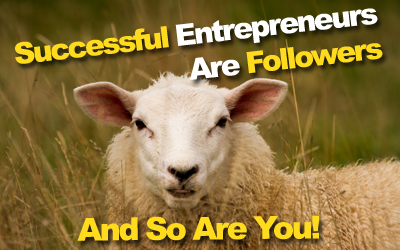 That’s right successful entrepreneurs are followers and so are you.

I doesn’t matter what you think, or what your clients/customers fans tell you, you are a follower.

And I can prove it to you.

Are you an entrepreneur?

If you answered yes to this question, then…

You are a follower.

Are you a successful entrepreneur?

Then you are even more of a follower.

“I am an entrepreneur and I go against the grain, I do the opposite of what the normal world does, how am I a follower?”

In reality you are just as much a follower if not more than the normal world.

I create my own schedule, I have my own business, I do what I want, when I want, from where I want, how am I a follower?”

How did you figure out how to open, run, and grow your business?

You learned from someone else.

Of course you learned through trial and error on your own, but for serious growth of the business there’s a good likelihood that you learned a lot from other successful entrepreneurs.

Who learned a lot of what they’re doing from others who were more successful than them.

You and them followed someone else’s guidelines.

If you have or had a coach, been in a mastermind, bought a product or service where someone else said to do something, and you did it.

You are a follower.

As an entrepreneur you actually seek out more help and advice from others, and look for more resources so you can get the results you want at a faster rate.

The more you do that, the more you are following what someone else is telling you what to do.

If you worked a job, you may only have a few bosses.

As an entrepreneur, you have as many bosses as you accept or allow into your life.  The more coaches, products, or gurus you buy into means that they play the role of a boss in some way.

They all tell you what to do to some degree.

The only difference as an entrepreneur is that you don’t have to answer to all of the bosses.  You can decide which ones to answer to.

In reality you have more bosses as an entrepreneur than if you were in a job.

Over time, having all those bosses actually holds you back more, and pushes you farther away from being different, or being a true entrepreneur.

Haha, you’re probably thinking either… this is bullshit, or holy shit…. I never realized how many bosses I have as an entrepreneur, and how much I’m following what others are telling me what to do.

And the more you follow others, the farther away you get from being your true self.

Now with all that being said…

It DOES NOT mean that being a follower is a bad thing.

As I mentioned the more successful someone is as an entrepreneur the more they’ve followed and done what others have suggested.

Being a follower is projected as having a negative feel to it in the entrepreneurial world.

We rebel against “following” anyone.  We beat our chest and pride ourselves that we go against the grain.

But we really are bigger followers than the normal world.

And we do that by listening, and learning from people who have already been where you want to be.

By following those successful entrepreneurs you can get results much faster than if you were to do things on your own.

Where it gets bad is when you start listening too much to others.  It’s when you start doing things the way they say to do them.  Or you operate from their standards for too long.

That’s when you start becoming them. And get farther away from you.

And the farther away you get from being you, the harder it is to find your way back.

In fact I spoke with a very successful entrepreneur recently.  Someone that has always known his identity and true self.  He told me that for about 2 months he really got away from who he was. He listened, followed, and did exactly what everyone else told him to do.

But it took him almost 2 years to find his way back.

That’s how much not knowing himself and following others affected him.

That’s pretty insane if you think about it.

Now if you’re struggling with your identity and you’ve been living, following, and internalizing other gurus or marketers advice for years, it could take just as long to find your way back.

It doesn’t mean it will take that long, it’s just a possibility.

So if you want happiness and TRUE success you MUST begin limiting who you are following, and start identifying.

Identifying those things will help you build awareness to all of this.

Again… following someone is not a bad thing.  It’s good when it’s beneficial to you in a healthy way.

Where the problem lies is when you follow them too deeply.

I actually see this a lot in masterminds and coaching groups who have a polarizing leader.

They get a lot of their members to start acting, talking, and doing things that they normally wouldn’t do. And I don’t mean having their members getting out of their comfort zone so they can grow.

I mean doing things that the member doesn’t feel right doing it.

Or the leader will get their members to do things just to see if they would do them.

You’d be surprised how many mastermind leaders get a kick out of seeing what their members will do if they tell them to do it.

Especially the successful entrepreneurs in their group.

And no I’m not bashing masterminds/ coaching groups.  If they are the right group for you they will be very helpful  and can make you grow and improve faster than anything else.

Then get the hell out, or don’t even think about joining.

A true leader will help their members grow as people, as an entrepreneurs, and as a human beings.

They will allow their members to focus on their own identity without trying to influence them to do things that they don’t feel are right.

If you are an entrepreneur you are a follower.

As I mentioned, the most successful entrepreneurs are followers too.

As long as you don’t blindly follow others and try to become them, then it’s cool.

If you want success in your business, and want to grow faster, you are going to have to follow others. There’s no getting around it. Just start identifying who is right for you to be following.

And if I’ve gotten your jimmies all rustled up because I said you are a follower, then I’ll just leave you with two things…

Hahahahahaha. It made me laugh so I had to include it.