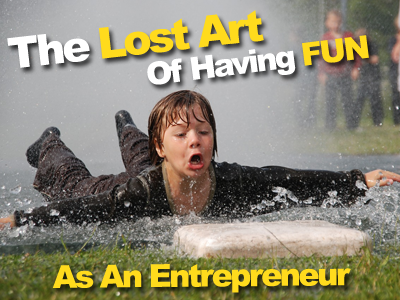 “The Lost Art Of Having Fun As An Entrepreneur.

i truly believe entrepreneurs have forgotten how to have fun.

In fact… I’m kinda fed up with how serious we are as entrepreneurs.

It’s time to put a stop to being so damn serious. You don’t have to be that way. 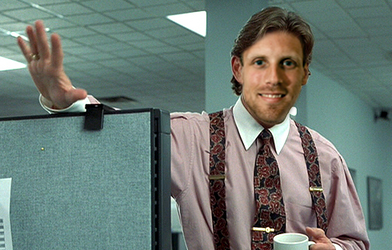 But I understand it.  That’s because I had a major case of seriousitis. I took my work, and life way to seriously.

And I ended up morphing into some sort of entrepreneurial BIll Lumbergh (the boss from the movie Office Space).

Seriously…I literally forgot how to have fun.

Don’t believe me, ask my ex. She was always telling me to stop taking things so serious.

In fact…I took things so seriously that she even tried to get me to start drinking.

That way I would loosen up.

How f’ed up is that?

And yeah of course if you want a great business you’ve gotta work. You have to take it seriously. But not so f’in seriously that people don’t even want to be around you. Or have someone try and get you to drink more!!!

I mean… who told you that you’re not supposed to have fun?

Is there some sort of fun police that said it was a law that you always have to be serious with your work?

I don’t think they exist, but it sure seems like it.

Just imagine if you did have fun, and your clients started to see that side of you. Don’t you think they would connect even more with you?

Hell yeah they will.

But you know what?  If you had a case of seriousitis, then you too have probably forgotten how to have fun.

And you know who else really forgot?  A shit ton of other successful entrepreneurs.

Not all of them course. But is it just me or doesn’t it seem that the more money entrepreneurs make, the more serious they get?

Think of the most financially successful entrepreneurs out there. When was the last time you saw them being goofy, acting silly, or even just laughing deeply.

Seriously… have you seen these guys having fun with what they do?

I have seen Warren Buffet and Richard Branson having fun though.  That’s one reason why people seem to love those guys.

It doesn’t mean there aren’t any, but the majority of entrepreneurs I know are NOT.

That’s why I think my buddy Dan Meredith is blowing things up right now and kicking ass. He is just being himself and having so much fun being himself.  People resonate with that because deep down inside, that’s exactly how they wish they were.

And it’s just so damn refreshing.

The more serious you get, the more of a chore the work becomes, and a lot of times that’s when you fall even deeper into the hustle and grind mentality.

From time to time… yes.  Is hustlin’ and grindin’ all day every day fun?

Maybe for some it is, but I’ve found that for a lot of those people they just work that much to avoid some deep issue that is going on inside.

They say they are working that hard to achieve their dreams, and they are. But once they reach what they want, they wont know how to enjoy it.

Because all they know is how to fill their time with work.  They don’t know what to do with their free time, or how to have fun.

So it’s important that you don’t end up like some sort of entrepreneurial Bill Lumbergh.

Speaking of fun, let’s clarify something. When I’m talking about having fun, I don’t mean going out and getting completely wasted and so f’ed up that you don’t remember what you did the night before.

What I mean is have fun with your work…

Have fun with what you are doing…

And make time to do fun things.

Also, make fun of yourself…

Show people the real you…

It’s really O.K. to be silly.  I give you permission.

I know these things can actually be scary. But very few people are going to fault you for having fun with what you’re doing. The ones who do, have something jammed so far up their ass that they secretly wish they had the balls to let go and loosen up themselves. And let me emphasize something else…

The more serious you are, the more boring you are.

And no one wants boring. NO ONE!!

I’ll be honest… Not only did I have a major case of seriousitis. I had an even bigger case of BORINGITIS.

And you know what it’s like to have a case of both of those at the same time?

It’s like sitting in one of those drive through safari parks with two screaming kids who crapped themselves, stunk up the car, and you’re not able to change their diapers because you have to stay in your seat for safety reasons.  All while watching those damn monkey’s hop all over your car, crap on it, and then rip your windshield wipers off. And there is nothing you can do about any of it.

Yeah, that’s how I’d describe what it’s like to have both seriousitis and boringitis. Not fun at all.

And I’m guessing if you’ve read this far, then you probably know exactly what I mean. That’s because you know an entrepreneur like this, or this is you.

And if that’s you…

It sure as hell did for me.

They are too straight lined…

They do things too much by the book…

And follow some sort of rules that say if you’re an entrepreneur that you have to be serious all the time.

Didn’t you become an entrepreneur in the first place , so you can break the rules and do your own thing?

Time to loosen up, let go. To not be afraid to laugh at yourself.

Scratch that… It’s time for you to just start laughing again. Did you know that on average, adults only laugh 4 times per day?

And I’m betting most entrepreneurs laugh less than that.

Now that I think about it, when was the last time you actually laughed so hard it made you cry?

It’s been about a week for me (which isn’t bad). It was actually this video that did it …

But just a couple years ago I couldn’t even remember when I laughed like that.

You’ve gotten so focused on the surface stuff of getting more leads, clients, money, and doing the normal day to day shit, that you have lost the ability to enjoy the process. And a big part of that process is having fun.

That’s why I called this the lost art of having fun as an entrepreneur.

And it’s become so bad that the idea of fun is taking one day a week to enjoy yourself.

That’s crazy. Why only one day? Why not have some fun everyday?

And yeah i get the idea of Sunday Funday. To take one whole day each week completely away from work to do whatever you want.

Hell,  I used to have to do the whole Sunday Funday thing. I was working too much.

But now it strikes me as odd that we need a specific day to remind ourselves to have fun and let go a bit.

It doesn’t make much sense.

But I get it. We’ve taught ourselves that work does not equal fun.

But who said it had to be that way?

Why not enjoy yourself?

Why not do what you really want to do?

Well there are 3 reason why…

When you do something for so long, you eventually become that thing. So if you’re serious for too long, that’s what you become.

You were not born serious. You were born happy, had fun as a kid, and then learned over time after dealing with a lot of crap, that you had to be serious.

Let me ask you this?

What’s the worse that would happen if you weren’t so serious?

Do you think your business would suffer?

I highly doubt it (unless you avoid doing what needs to be done). That’s because if you had more fun building your business, and being you, you would be a lot more engaged, creative, and able to put a ton more energy behind it.

And that can only lead to more success.

And if you’re scared to be different…

Well, again… what’s the worst that could happen?

Yeah that’s definitely possible. But don’t you think if you were more yourself, had fun, that more people would be attracted to what you’re doing?

And would you really want pain in the ass, boring clients anyway?

They’re like that old cranky neighbor that blames you for their garbage being spewed everywhere when they were the ones who backed over it with their own car.

So when you look at all of these things this way, do you really have anything to lose if you start having fun and being more you?

Now if you’re a very serious person to begin with then continue to be you. Don’t try and force yourself to be something different. That won’t work, and you’ll look like an idiot.

The same as if you decide to make this switch from serious to fun overnight.

It’s going to take a little bit of a discovery process and really looking into who you are to find your ‘fun factor’ again.

But if you’re patient with it and a bit persistent, you will start to feel and see flashes of fun come back into you’re work. You’ll start implementing it in your daily life, and others will start to notice it as well.

Once others start to see this change in you, you’ll notice they even treat you differently. I’d even say they will treat you better.

But it all starts by saying… “F*ck It!

Because you sure as hell don’t want to look back on your life and realize how you were such a dick to yourself all this time.

So do something good for yourself and look into the lost art of having fun as an entrepreneur.